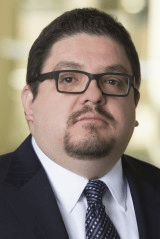 In early March I had the opportunity to travel to Washington DC; I enjoy visiting this vibrant city, walking alongside Richard Romanesque and Queen Ann homes next to modern office buildings and usually getting lost after leaving a metro station. During this trip I  met with some of our partner agencies to learn about their current work, visiting their expanded offices and strengthening our relationships. Each time that I travel for business I like to connect with professionals that are providing a significant contribution to better the understanding of the rich Hispanic culture in the U.S.  This trip, I had the privilege to meet in person and have a one-on-one interview with Mark Hugo Lopez, Director of Hispanic research at the Pew Research Center.

Mark’s job is to coordinate and direct the Pew Research Center’s Hispanic Trends Project and assist colleagues on any research that is related to Latinos that includes analyzing their attitudes, views of religion, politics and immigration reform. As a director he helps to shape the research program related to Latinos across the Pew Research Center.

Natasha (Nativa): How is a topic selected for research and what is the process used to create a Pew report?

Mr. Lopez: First, it’s important to note that we have a number of products that we regularly produce. For example, we are always going to be producing demographic portraits of the Hispanic community in the United States. That means that we will, on an annual basis, update those reports, those tables, etc. That’s everything from how many Latinos there are in the U.S. and how the nation’s Hispanic population is dispersed. We also produce an estimate of how many unauthorized immigrants there are in the country.  Those are products that we know we are always going to have in the pipeline to produce.

Every year we do an in-depth survey of Hispanics and we call it the National Survey of Latinos. This is something we have been doing since 2002 and it’s here where we try to touch on topics that are going to be more timely.  For example, if it’s an election year our survey will largely be focused on the upcoming election. There will be questions in there this year that will focus on – do Latinos intend to vote, whom do they intend to vote for, and are they following the election.  If immigration reform comes back up onto the radar screen, that too may be included. We try to pick topics that are timely and relevant looking for the big Hispanic trends, which include things like – how much technology do they use? What’s happening with the speaking of Spanish and the speaking of English? Are those on the rise? Are those on the decline? When and where they go to get their news? These are things we’ve been tracking for a number of years now and they are examples of trends that we want to continually update, because frankly some of them are changing pretty fast.

Natasha (Nativa): How do you identify a point of view among Hispanics when analyzing a particular topic?

Mr. Lopez: We obviously want to capture the opinions and attitudes of the Latino community on a range of issues. For example, we might want to take a look at how Latinos feel about their financial position and how has the recession impacted them.  Do they feel that their personal financial situation is better now than it was a year ago, or do they expect it to improve?

But in order to provide the context for this we often not only want to measure what’s happening with Latinos, but we want to look within the community because there are often many differences that are worth noting. For example, U.S.-born Latinos might have a different view than the foreign-born. You also might see views differ by the language that somebody speaks and you will see differences perhaps even along country of origin, such as Cubans versus Mexicans. When we are doing our research we are looking at all of the different ways to examine within the community.

To provide more context, our Hispanic surveys have questions that are similar, if not exactly the same, as what’s being asked to somebody from some of the other general U.S. population surveys from the Pew Research Center.  That way we can compare Hispanic public opinion to that of non-Hispanics. This is really important particularly on issues of immigration reform for example because Latinos are overwhelmingly more likely to say that they favor a pathway to citizenship for unauthorized immigrants. The general public does too, but there’s a 20-percentage point gap. That comparison is important to have because it really places Hispanic opinion within context. 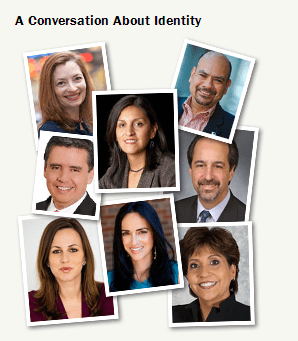 Pew Research Center: Hispanics and Their Views of Identity.

Natasha (Nativa): When was the Pew Research Center’s “Hispanic Trends Project” created and what is the goal of this initiative?

Mr. Lopez: The Hispanic Trends project has only been around since August of 2013. However, it was simply a renaming of an institute that already existed, the Pew Hispanic Center.

The Pew Hispanic Center was founded in 2001. The Pew Charitable Trust had wanted to have a program which would examine the growing Latino community. There was a sense that there was good research out there, but that the story of the Latino community and how it was changing in America wasn’t being told through data in the way that we could do it. So the Pew Charitable Trust established the Pew Hispanic Center in 2001. Roberto Suro was the first director of the center and our purpose remains the same, to chronicle how Latinos are changing America and how America is changing Latinos.  We endeavor to look at the change in demographics of America, particularly with a focus in the Latino community.

Natasha (Nativa): There is always debate about language preference among Hispanics. Based on your research and experience, which language is the most dominant among Hispanics today?

Mr. Lopez: Well at the moment it’s Spanish. Within the Latino community among people ages five and older, 35 million say that Spanish is spoken within their homes. In our surveys of Hispanic adults we find that roughly 25% say they are Spanish dominant while roughly another 40% plus say that they are bilingual.  So Spanish by far is more used among the community than English.

Nonetheless, things are changing in some very interesting ways. We are going to see a decline of the share of Hispanics who live in households where Spanish is spoken. The census bureau has predicted that by 2020 only about 2/3 of Latinos will live in a household where Spanish is spoken and right now it’s about 3/4. The percentage that speak only English at home will be on the rise to about 1/3 by 2020 whereas today it’s right around 1/4.  So we are seeing some changes in the language use among the Latino community, particularly as those Latinos who were born within the United States go to the U.S. school system and enter adulthood. Overall, English is on the rise. However, it is interesting to note that if you ask Hispanics today if it is important that future generations of Hispanics speak Spanish,  95 percent, (even among English speaking Latinos), will say that it is important.

Mark Hugo Lopez is director of Hispanic research at the Pew Research Center. He studies the attitudes and opinions of Latinos, Hispanic views of identity, the political engagement of Latinos in the nation’s elections and Latino youth. Lopez also coordinates the Hispanic Trends Project’s National Survey of Latinos, an annual nationwide survey of Latinos. He was the research director of the Center for Information and Research on Civic Learning and Engagement (CIRCLE) as well as a research assistant professor at the School of Public Policy at the University of Maryland. Lopez received his doctorate in economics from Princeton University. He is an author of reports about the Hispanic electorate, Hispanic identity and immigration. Lopez frequently appears in national and international media in both Spanish and English.