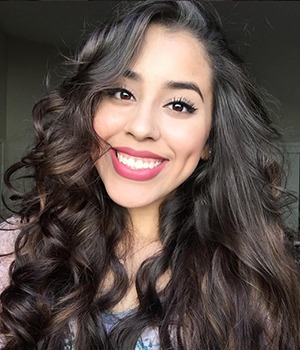 When Less is More: Latina Micro-Influencers Pave the Way – Interview with Tyannah Vasquez

As I’ve learned in the advertising business, you can tell a lot from a smile. When I first came across Tyannah’s friendly expression; I knew she was a perfect match for my client’s campaign.

While working on one our agency’s CPG client’s accounts, on a task that admittedly can be a tad laborious, it is the rare persona whom I encounter who makes an impression on me right off the bat. It’s nothing personal; just that on an average day I may review hundreds (if not thousands) of individuals to find just the right person to work with our cherished, globally-renowned brands.

Upon successfully contacting the owner of that grin, Tyannah, and several pleasant exchanges, my agency (Nativa) gladly agreed to send her a few of our brand’s newest products for her to try on her brilliantly curly, long hair. Within a week we were pleased to see that she had created an experience video using our client’s curling mouse and styling putty on her Instagram page. ‘How nice!’ I thought, as I was accustomed to seeing our fans sharing our product, and at times getting several hundred Likes on these posts. Our team never imagined the type of engagement the video this vibrant social media user posted would create. Interview with the Micro-Influencer

So, who is a micro-influencer? And what can be learned from someone defined as one such as Tyannah? In the advertising industry, influencers are typically considered as people with social media followings of over 150K followers while micro-influencers are generally considered people who have between 10K and 149K* followers. Many advertising articles have come out over the past 6-12 months touting the effectiveness of campaigns that integrate micro-influencers, due to the higher engagement rates* that can be achieved versus working with traditional influencers. Wanting to do more than simply research the folks I interact with daily for our brands, I decided to ask Tyannah if she would be kind enough to share insights from the micro-influencer perspective. She obliged and soon I learned that besides posting highly visual imagery on Instagram, that Tyannah is an up and coming 19-year-old singer from southern California who has just released her first single via Universal Music Group. I asked Tyannah what type of Influencer she considers herself — since on Instagram alone she has over 27k followers — and she stated that she doesn’t put too much thought into that. She is more focused on posting content that she feels reflects her personality (fun) and will be relevant to her audience.

Background and Career Aspirations of a Micro-influencer

Digging deeper, and wanting to learn what drives a micro-influencer, I asked Tyannah to tell us a little more about herself, her career and goals. She explained that at 3 years of age she got into competitive dancing and at 4, singing. Since graduating high school in 2014 she has pursued singing and acting full-time. Ambitious to learn the business robustly, she also has enrolled in college-level business classes to “better understand the business side of the entertainment industry.” Additionally, she’s working on her new single “2 Late”, which she spoke passionately about. Tyannah shared that she has younger siblings whom are also into singing, dancing and writing. Her grandmother is also a singer, while her mother is a Talent Manager/Writer. For Tyannah, entertainment is a long-term goal; not something she is passive about. “I want to be successful. I want to have that all-around career in singing and acting.” She elaborated that several of the performers that have inspired her since youth are Michael Jackson, Mariah Carey, and Whitney Houston. “I’m an old soul!” she exclaimed proudly, and as I listened to her I could feel the emotion pass through the phone’s speaker. Additionally, Tyannah is an actress growing in prominence. Among the many great stories Tyannah told was how she first broke into the acting industry when at just 4 years old, she performed in a macaroni and cheese commercial for a company based in Japan.

I was curious to know which online platforms a social media micro-influencer such as Tyannah uses in her daily life. She shared that Snapchat is one of her favorites because, “…I get to live-stream what I’m doing, when I’m on set, or doing auditions as well as in the studio.” Tyannah also uses Twitter and Instagram frequently, and uses Facebook mainly for her family. When I asked Tyannah the best way to reach out to Latina micro-influencers such as herself she graciously explained that, “…the best way to contact me is through social media. I’m a teenager; I’m always on my phone!”

A frequently found video clip posted by Tyannah on Instagram

Tips for other Micro-Influencers & Entertainers just starting out?

Impressed by Tyannah’s background and wanting to see what she could share as far as tips to her peers she offered these top 3 pieces of advice for someone starting out:

Powerful guidance from the young entertainer. Being in the performance field, I also asked Tyannah about handling criticism and she commented that she welcomes it if it is not hurtful or disrespectful. She told us that her mom, a single parent, has helped her grow into a strong woman and taught her to not let people discourage her or hold her back. She shared encouraging words for her peers trying to break into similar industries. “Don’t ever give up. You’ll get there, don’t rush it! Your hard work will go a long way.”

Working with Brands – Why Latina Micro-Influencers?

My agency wanted to know what were some of the challenges for a micro-influencer when creating content for companies so I asked Tyannah to share any experiences she may have had with either brands or agencies. She explained that at this point early in her career that she mostly buys her own fashion, beauty, and health products and that if she feels strongly enough about them, then she will share that product and its benefits with her loyal fans.

“I don’t false advertise, if I believe in the brand then I will share it.” When I asked her why brands should consider working with Latina micro-influencers she quickly replied, “Culture is very important. Brands need to relate to people of different ethnic backgrounds. Does that person look like me? Personally, I’m multi-ethnic; I’m African-American, Native-American, European and Latino.”

Wrapping Up with Tyannah the Micro-Influencer

As our interview drew to a close, I had to ask more about that fateful Instagram video that Tyannah had created for our brand which turned into one of our highest performing social media interactions of the campaign. Tyannah explained that on her average Instagram post she typically gets between 1-2 thousand engagements, but that the day she posted the video for our brand that she was startled by the constant buzzing of her phone notifications. She checked and saw it had 5,000 views, then 11,000, then she got a notification that her video was chosen as a featured post by the internal Instagram curation team. “Then I really got excited!”, bursts Tyannah.

By the end of the day she received over 25,000 engagements on that video alone. As I glance at the video snapshot and see the flawless expression from the benevolent Tyannah, I totally understand. What a smile indeed.

Video with over 25K engagements from Tyannah