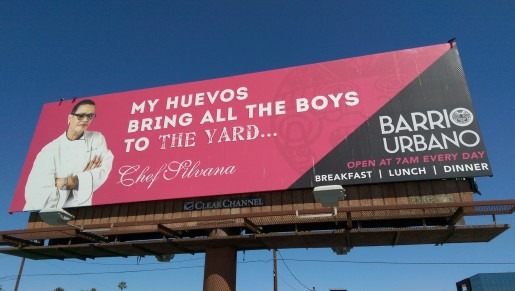 In 2014 we touched base on the pulse of Phoenix, Arizona Hispanic advertising which is evidenced right here in the southwest via billboards. The $8.3 billion dollar U.S. Hispanic advertising industry is constantly evolving and as we draw near to the mid-point of 2015 we wanted to check in on the same topic and note any developments.

For this round we are focusing on an area very representative of the Phoenix market, which is 7th Street in the heart of central Phoenix. For this research we focused on the area north of Baseline Road in the south up to Bethany Home Road in the north.

As we started north and headed south, the billboard pictured above is in the more affluent area of central Phoenix.  This particular billboard is always occupied by an ad for the Fox Restaurant Concepts group who rotates ads for a selection of their 20 Phoenix area restaurants from this space. This billboard is located just next to their prime central Phoenix location, Culinary Dropout, The Yard, and their newest tenant, fellow local restaurant favorite, Barrio Urbano.

Fox has used their recent partnership with this successful Mexican favorite to take the opportunity to launch their first Spanglish ad. It’s a humorous ad as you can see in which the well regarded Chef Silvana Salcido of Barrio Urbano proclaims in the ad that her ‘…huevos bring all the boys to the Yard’ rather than ‘her milkshake’ as the 2003 Kelis pop song elegantly states.

Now, most valley area hipsters worth their salt know that huevos are the Spanish word for eggs. So based on the fact that this is the only Spanish word in the ad, it can be assumed that most viewers of all races will comprehend the meaning, regardless of their language of preference.

However, this ad goes deeper and touches on a current Hispanic marketing topic, does bilingual or Spanglish advertising work? According to the 2010 census study, Phoenix is home to nearly 600,000 Hispanics, making up over 40% of the total population.  And 79% of these valley area Hispanics speak at least some Spanish at home, while 28% of them list Spanish as their dominant language.  Based on these statistics there is no doubt that Spanglish conversation happens in Hispanic households, but there is much debate nationally on the actual functionality of Spanglish in marketing and advertising.

One of the key motivations a brand has to use Spanglish is when a message can universally reach two audiences without having to place two separate ads. Logical, because if the ad can reach both groups, there will be savings to their ad budget. Another reason to place a Spanglish ad is that it serves as a virtual head-nod to the Hispanic community that you understand their culture and respect it. Finally, brands have realized the importance of the Hispanic millennial consumer and understand that this group has been found to favor English more often than Spanish.

On the contrary however, brands need to beware that they can turn off Hispanics with bilingual ads if they don’t come off as a ‘real’ effort. Hispanics are known to have a very high BS-meter and it can be set off in an instant by Hispandering efforts from large brands of all types. Secondly, many Hispanics find the mixing of languages disrespectful and prefer brands leave their language alone. Third, it is important to understand cultural nuances when using Spanglish and have a clear understanding of the targeted audience. For example, ‘huevos’ for some Hispanics could have a negative (or positive) connotation and could anger some.  For example, foreign-born Hispanics (who may be fully bilingual) are likely not to be familiar with the Kelis song and would not understand the reference. For them this could be a strange or even disrespectful ad.

For this restaurant group, their main audience is typically a more affluent general market, so this ad may be more of the fist-bump variety as it is unlikely they are targeting all Hispanics in the Phoenix valley based on the sole location of this advertisement. They are  targeting the more affluent Hispanic consumers that find themselves in this neighborhood and who almost certainly speak English as well.

So how does that compare with McDonald’s bilingual billboard strategy or that of 1st Bank, a regional player in the southwest banking scene? Sign up to get alerted when this article on their Hispanic billboard advertising strategy comes out next week.