What Hispanic Marketers can learn from Paranormal Activity: The Marked Ones

The shriek was heard in the hallway outside the movie theatre. 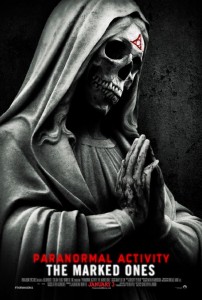 Inside, the unthinkable had just happened to the actress on screen and the audience erupted in fright. As I looked around to scan the crowd, I saw a very diverse Hispanic group watching in terrified delight. As I drove home I wondered if the mostly Hispanic audience was a coincidence, or if there was something larger at hand.

Through my research I found that Paramount Pictures had indeed catered this movie, Paranormal Activity: The Marked Ones, to the bicultural Latino audience. Paramount knew already that Hispanics over-indexed watching their movies, as up to 33% of ticket purchases for their latest movie have been from Hispanics. Additionally, they know that Hispanics go to the movies more often; 9.5 times per year compared to 6.1 times per year for white Americans.

The movie itself was good, and as the shrieking girl could attest, quite scary.  But for a marketer, it was more than that.  There are real lessons to be learned from this movie about how marketing to Latinos has evolved in 2014.  The movie studio demonstrated these lessons visually which for a marketer is a treat, and I have endeavored to detail them here.

The Top 3 lessons provided by the movie for Hispanic Marketers:

A central issue in the movie is in the newly found possession of the star, Jesse, and his family’s struggle to free him of this possession.  For Mexican Americans, this means a trip to the botanica, and possibly a visit to a curandero (healer).  In The Marked Ones, they had both.  By doing this, the movie provided a story that was very real for many Hispanics and something that they can easily relate too.

2. It doesn’t have to be in Spanish

The movie The Marked Ones is in English, but it is loaded with Spanish references, and my favorite buzzword, Spanglish.  It is real conversation too, it is not forced and you can tell that the actors really do speak the language.  It does help to be bilingual, in fact it is estimated that a bilingual Spanish speaker will catch about 20% more conversation in this movie than a non-bilingual moviegoer.   But non-bilingual Hispanics and the general market will enjoy it just the same.

3. Don’t Pander to the Audience

Throughout the movie it did not feel as though I should be watching this because it is a Latino movie.  I did not feel pandered to, which the Latino Rebels discuss in this recent article.  It just felt like a scary movie that happened to have a Hispanic cast.  The producers didn’t add any Spanish words to the movie title or even put a Latino on the movie poster or any other sign that would have made it extra-obvious that this movie was for Hispanics.  It was simply a good, scary movie, and that, at the end of the day is what Latinos want to see when they head to the theatre.