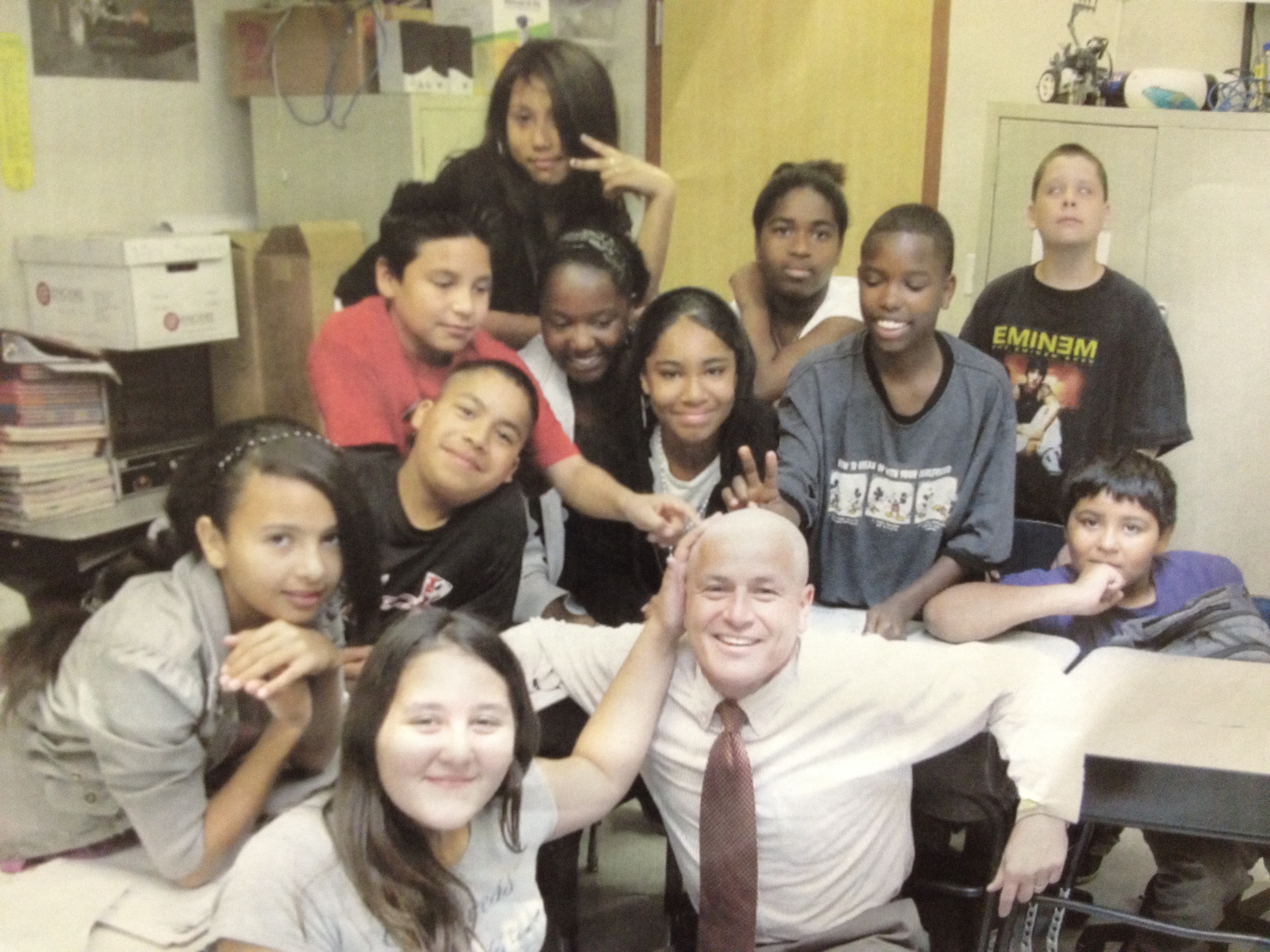 When I first walked into the office of State Senator Jerry Lewis, I did not know what to expect.  I had read and heard much about the candidate that defied the odds to beat and oust Russell Pearce in Arizona’s former Legislative District 18 (Lewis resides in the newly formed District 26 serving Mesa and Tempe) recall election last fall [1], but I did not know what I would discover about him on a personal level.

The man Senator Lewis defeated is infamous as being the Senator to sponsor the nationally criticized SB 1070, anti immigration policy that requires state law officials to verify an individual’s immigration status during a lawful stop.  Surely, a man who had the bravery and effectiveness to stand up to one of Arizona’s legal bullies would hold office in an exquisite locale.  I thought perhaps there would be a grand entrance to his corner office with a picturesque view of the valley.  There would likely be staffers writing down every word spoken between us I thought as reasonable as well.  When I walked in his quiet, windowless office I realized none of this was the case.  And as we spoke it made more and more sense why. 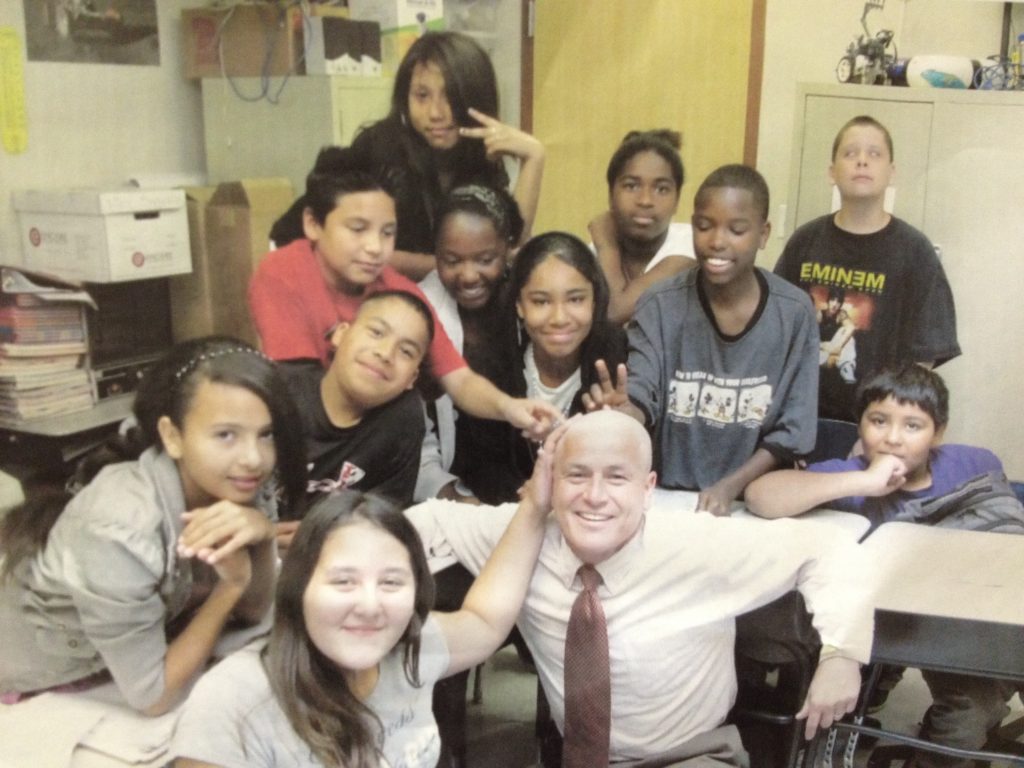 Senator Jerry Lewis (at bottom right) with students of Children First Academy. Bald for the moment, he had promised to let students shave his head if they all had perfect attendance the week of AIMs testing.

I first met with Senator Lewis at an event hosted by the East Valley Hispanic Chamber of Commerce on June 6th.  It was there that 200 local business owners and interested individuals sat down to discuss the role of the Hispanic market in the east Phoenix valley.  Senator Lewis came up to me after I spoke about the ROI of Social Media and mentioned he wanted to talk.  Flattered, I took him up on his offer.

As I sat with Senator Lewis that morning in his office he explains to me what he does and I obtained a better understanding of him as a person.  Being a lifetime businessman, he has not abandoned his roots and today in addition to his senate duties, serves as the CEO of the Sequoia Choice charter school located in Mesa, AZ.  “Education is key to a successful rebound for Mesa, as well as Arizona at large,” he explains.  In fact Sequoia Choice serves an important part of this task as it provides the ability for children that don’t speak fluent English to not be left behind in public schools, but to go at their own pace in a bilingual learning environment that better fits their needs.

A Different View on Immigration

We then spoke about immigration.  His public stance on the issue of immigration is the following1: “Arizona’s first priority is to effectively and collaboratively work with the federal government to secure and enforce the border. While the federal government fulfills its responsibility to secure the border, I support a rational and fair solution for dealing with immigrants who have committed no crime other than being here without proper documentation. Reasonable, enforceable and sustainable immigration reform must be guided by principles of maintaining national security, respecting all humanity, preserving families, enforcing the rule of law, and weighing economic impact.”

I admire his position on immigration and wanted to know more.  He explained to me that a large reason that he was voted into office was that the former Senator Pearce had lost touch with the community with a zero-tolerance anti-immigration policy.  This policy not only affected individuals but also businesses in Mesa which suffered backlash from the controversial legislation.

Connection with the Hispanic Community

Senator Lewis told me that being an active part with his community including Hispanics is something he has always believed in since his days growing up in Los Angeles.  Having temporarily lived in Mexico as part of the Sister City exchange program while in high school cemented his feelings of compassion for Hispanics.  He ensured me that supporting Latinos is something he has done all his life, and not just in recent years.  The conservative Republican summed it up by saying, “Reform is needed, but there is a right way to do it.”  Additionally, Senator Lewis commented on the upholding of SB 1070 in the last few weeks, saying, “[you] can’t ignore demographics. We must create and implement permanent solutions to our immigration concerns and move on with other priorities like growing our economy, creating jobs and improving the academic achievement of our students.”

I left Senator Lewis’s humble office that day feeling that Mesa and Tempe were indeed in a better situation with him in place as senator.  These cities with a combined 625,000 people need someone who truly represents them and their best interests.  Mesa and Tempe, with approximately 160,000[2] Hispanics within their boundaries (26% of the total community) will benefit from having Senator Lewis in their corner. 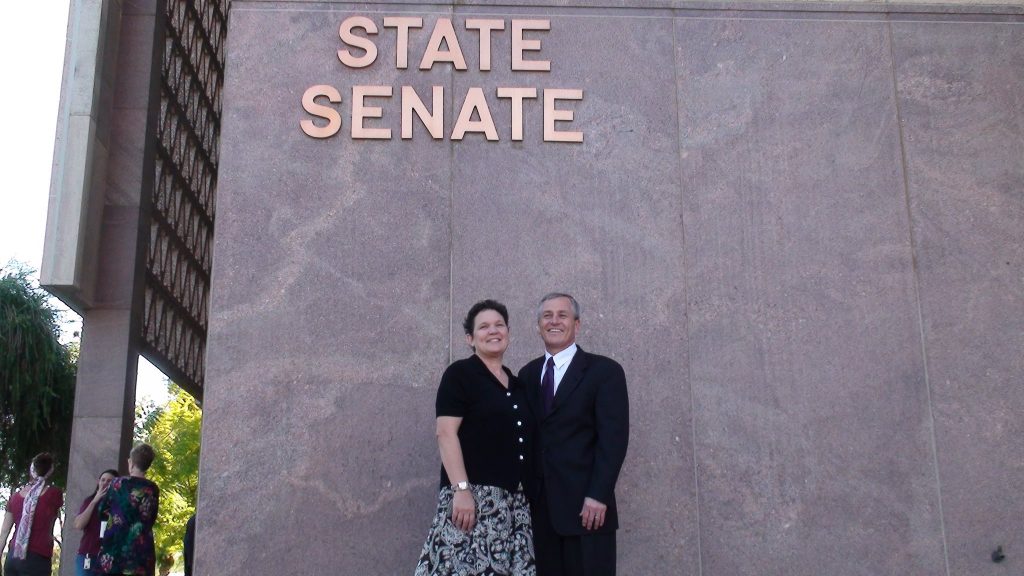 Jerry Lewis and his wife after the election this past November

Other links for Senator Jerry Lewis: