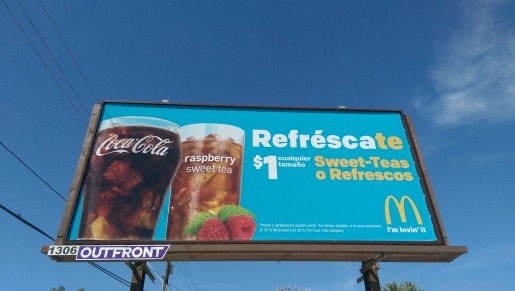 Phoenix Arizona Hispanic Advertising – Careful Use of Spanglish is Key

As we learned from the article on Spanglish billboard advertising, there are many things to consider when placing a bilingual ad.

We are interested in finding what lessons can be learned in Spanglish and Spanish advertising from billboard ads displayed in Phoenix, Arizona. We focused this time on an area very representative of the Phoenix market, which is 7th Street in the heart of central Phoenix. For this research we analyzed the area north of Baseline Road in the south up to Bethany Road in the north.

The first advertisement reviewed is from 1st Bank out of Denver, CO. This is one where we needed to sit down and evaluate the ad as a team as we did not get it from a glance. 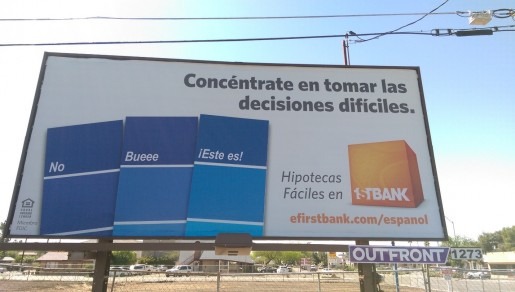 Upon further review we realized that there were three paint card options in which the imagined user has discarded the first two paint cards and opted for the third. The first sample says ‘No’ simply, which is clear in either English or Spanish. The second sample says ‘Bueee’ which is referring to an uncertain state of mind like “hmm, maybe…” The third sample says ‘Este es!’ with excitement for the selected sample. The message of the billboard is ‘Concentrate en tomar las decisiones dificiles.’ which translates into ‘Concentrate on making the tough decisions.‘

The ad is for 1st Bank’s home equity line of credits and is one of many they have placed in highly Hispanic zip codes throughout the valley. As you may have thought to yourself while reading, consumers will not take time to evaluate ads and deduce the meaning. This ad fails as it is too much to grasp while driving by. We have seen 1st Bank do better and will keep watching what they put up next.

How will the Spanglish Ad do?

As many know, Spanglish is a tricky game and should be used with caution, like a loaded gun. Looking at the next ad from McDonalds, they seem to be responsible in hiding the keys to the shotgun locker.

As we drove further down 7th St we found the billboard for Sweet Tea from McDonalds, which is a trendsetter when it comes to multicultural advertising and reaching their Hispanic target audience from all economic levels.

As you see from the ad, it plainly says in Spanglish “Refrescate. Sweet Teas o Refrescos. $1 cualquier tamano.” (Refresh yourself. Sweet Teas or soft drinks. $1 any size.) However, the Spanglish gets clever as the word ‘te’ in ‘Refrescate’ is highlighted in yellow. This alludes to the English translation of ‘te’ which is ‘tea’, which the ad places in English. This ad can be read plainly by any Latino passing 7th Street and Southern as $1 for a sweet tea, no matter of their language of choice.
Bravo McDonald’s, bravo.

So as we can see, bilingual Spanglish ads vary in their messaging, targeting, and effectiveness. It is important to learn what we can from billboard ads and to take that knowledge into our everyday marketing efforts.